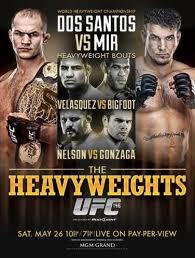 Dana White had to shake up the card in late April after Alistair Overeem, who was slated to  fight for the Heavyweight Belt against current champ Junior Dos Santos failed his pre-fight drug test.  This resulted in a lot of movement from each of the 5 fights with Gabriel Gonzaga also being replaced.  The main card now looks like the following:

Here are the odds for the five main event fights at UFC 146.

As you can see there is no one online sportsbook with the best odds for each outcome in all of the fights.  5Dimes.eu has the majority of the most bettor friendly odds, but Bovada and Bookmaker also show some good odds for certain fighters.  Each of these sportsbooks are top quality so I suggest you open up an account with each in order to get the best odds for each of your bets on UFC 146 and in the future.

Online sportsbook 5Dimes.eu also offers a wide variety of prop bets on each of these big fights.  For example you can bet on whether the Mir vs Dos Santos fight will go over/under 1.5 rounds:

It seems that Dos Santos is expected to finish off Mir early on in this fight.

As mentioned earlier 5Dimes.eu, Bookmaker.eu and Bovada.lv are all high quality, trustworthy sportsbooks that each offer some of the best odds you will find online depending on which fighters you want to bet on.  If you were only going to sign up at one bookie though I would recommend 5Dimes.eu because they always offer fair UFC betting lines and a wide variety of prop bets.

Click here to sign up at 5Dimes.eu.  You will be taken to the 5Dimes.eu website where you must click on the blue ‘Register Today’ button in the right sidebar.  At 5Dimes you have to open an account before you can see the odds so don’t be surprised that you can’t look at the betting options right away.  If prompted use 5Dimes marketing code AF0002879.

After you have created an account head over to the cashier section and make a deposit.  5Dimes does offer a sign up bonus of up to $520 so the bigger the deposit you make the larger the bonus you will be awarded.  If you have any trouble making a deposit don’t hesitate to contact customer support.

Now that you have money in your account click on the ‘UFC’ or ‘Props’ boxes under the ‘Fighting’ heading in the sportsbook to see the different betting options and place your wagers.  Then sit back and watch UFC 146 unfold on PPV this coming Saturday and see how Frank Mir holds up against the champions Junior Dos Santos.

To learn more about the event visit the official UFC website.