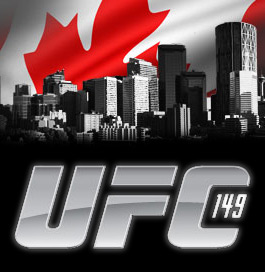 UFC 149 has a hard act to follow after UFC 148 was one of the biggest and most successful UFC events in the history of the company.  That being said UFC 149 has a few solid fights of its own.  They might not have the build up that the Silva vs Sonnen fight had, but they will be entertaining nonetheless.

UFC 149 is set to take place in Calgary, Canada at the Scotiabank Saddledome, and like all UFC events held in Canada it is sure to get fans into the stadium.  There are three main fights on the card with the main event being an Interim Bantamweight Championship fight between Urijah Faber and Renan Barao.  Online sportsbook 5Dimes.eu is providing odds for the three main fights on the card and you won’t find better odds anywhere else on the internet.  5Dimes also accepts American bettors!

Faber has spent most of his career fighting in the WEC in the Featherweight division, but after losing that title to Jose Aldo in April of 2010, Faber came to the UFC and fought at the Bantamweight.  After a win over Wineland he got the chance to fight Dominick Cruz for the UFC Bantamweight title, which he lost by unanimous decision.  Faber then beat Brian Bowles in November of 2011 to get this shot at the interim championship against Renan Barao.

Barao is 28-1 in his MMA career (28-0 since losing his first MMA fight) and has won each of his 3 fights since joining the UFC.  This will be his first big fight against a serious contender so it will be interesting to see if he can continue his winning ways.

Lombard is a Cuban fighter that has been dominating every fight he has had recently.  He recently won the Bellator, CFC and AFC Middleweight Championships and he is now coming over to the UFC to see how he stacks up against the best in the world.  His first test is Tim Boetsch who has won his last 3 UFC fights including a knockout of Yushin Okami at UFC 144.

Kongo is a UFC vet, with this being his 16th UFC fight.  Kongo is coming off a loss to Mark Hunt by TKO in the first round in February and will be looking to bounce back in this fight.  Jordan has one UFC fight under his belt, a knockout of Oli Thompson in March on UFC on FX.  This will be a bigger test for the big man.

All of these odds were taken from 5Dimes.eu, the best place to bet on UFC events online.

Visit 5Dimes.eu to check the updated odds and to bet on UFC 149.