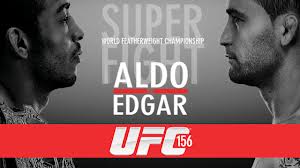 It’s the third UFC event in three weeks this Saturday with a stacked card for UFC 156.  The title fight will be in the featherweight division with Jose Aldo defending his belt against Frankie Edgar, who has dropped down from lightweight to see how he fares in his more natural weight class.  Some other big fights that are also on the card include Rashad Evans vs Antonio Rogerio Nogueira, Alistair Overeem vs Antonio Silva and Jon Fitch vs Demian Maia.

5Dimes.eu is our recommended bookie for betting on UFC fights because they generally have the best odds for each fighter.  Below I will outline the money line odds, but there are also many prop bets available for each fight so visit 5Dimes.eu to see these.

Jose Aldo has been the only holder of the UFC Flyweight Championship and he doesn’t plan on allowing Edgar to change that.  Aldo has now defended 3 UFC Featherweight Championships after defending 2 WEC Flyweight titles.  He hasn’t lost a fight since 2005 and that was in a lightweight bout (never lost as a flyweight).  Frankie Edgar will likely be his biggest competition to date however has been in the last 6 UFC lightweight title fights, winning (or drawing) the first four of these before losing 2 decisions to Benson Henderson.  It will be interesting to see how he fares at what really should be his normal weight class.

Rashad should win this fight easily, as the odds indicate.  His last fight was a loss to Jon Jones for the light heavyweight UFC championship and he won his 4 fights before that against some top competition.  Nogueira beat Ortiz in his last fight, but Tito is washed up and Nogueira had lost his 2 fights before that.  This really should be an easy win for Rashad.

If Overeem can win this fight he will likely be in line for a shot at the UFC heavyweight championship.  He has won his lone UFC fight over Brock Lesnar, but then tested positive for too high of a testosterone level and missed several months, resulting in him not fighting in 2012.  Silva is old and washed up, but will make a good stepping stone for Overeem.

Fitch’s only two losses in the UFC have come to Georges St. Pierre, the current welterweight champion and Johny Hendricks, the man who many feel is currently the top contender.  Fitch should be able to handle Maia in this one, although he does have two wins in his first two fights at welterweight.

You should visit 5Dimes.eu and open account if you haven’t already done so.  Then you will find the odds by clicking on ‘UFC’ under the ‘Fighting’ section of the 5Dimes sportsbook.  Place your bets and then watch the action unfold Saturday night.  Visit UFC.com to keep up with the event.