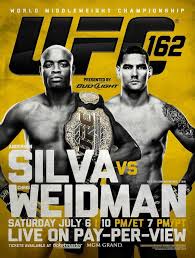 UFC 162 promises to be one of the biggest UFC events in recent history.  The hype train has arrived and many “experts” and fellow MMA athletes are picking Chris Weidman to pull of the upset and be the one to beat Anderson Silva for the first time in almost a decade.  This would be quite the tall task seeing as Silva has won his last 17 fights, with his last “loss” being a DQ due to an illegal up kick against Yushin Okami in January of 2006.  His last true loss came in 2004 via a flying scissor heel hook submission.  You can see the video of his last true loss below to see just what it takes to beat a guy like Silva.

The odds showcase what the so called experts are saying with Anderson being only a relatively small favorite to win this fight.

Here are some other interesting prop betting odds from 5Dimes.eu:

With MMA prop betting you can often find some lucrative lines if you have a good idea about how a fight may play out.  Head over to 5Dimes.eu to check out all of the lines available.

There are other fights on the card.  Here are some of the odds of the other big fights you can see at UFC 162:

Frankie Edgar is currently on a 3 fight losing streak in the UFC, but each of these fights were title fights.  This will be the first time Frankie hasn’t fought in a title fight in the UFC in 7 fights.

This is Roger Gracie’s first fight in the UFC after his last 5 fights were in Strikeforce.  He was 4-1 in Strikeforce, but didn’t really beat any big names.  Kennedy is also moving over from Strikeforce and it’s somewhat surprising that these two are the third biggest fight on this card.

Tim Boetsch is coming off a loss to Phillippou in December, but he has some solid wins over Okami, Nick Ring, and Hector Lombard of late.  It’s surprising he isn’t more of an underdog against Mark Munoz who defeated both Demian Maia and Chris Leben before losing to Weidman in his last fight a year ago.

To bet on UFC 162 online click on any of the links above.  I’ve included the bookmakers beside each of the possibilites in the odds to show where the best line is for that option.

After you create an account and fund your account you will find the odds usually under either ‘MMA’ or ‘Fighting’.  I suggest also checking out the UFC 162 prop bets because you can often find some sharp bets.

Will Silva be dethroned like many of the top wrestlers in the sport believe/are hoping that he will.  I personally don’t think so, but it will be quite a show this Saturday night.  Keep up with the card at the UFC website.