Bet On UFC 189 – McGregor vs Mendes, Rory vs Lawler – Odds and Picks 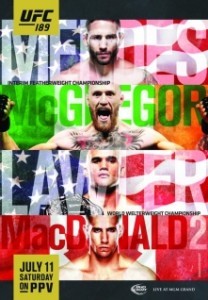 It could have gone down as the biggest UFC event to date with Conor McGregor fighting Jose Aldo for the Featherweight belt after 6 months of build-up that included a worldwide media tour.  Unfortunately for us fans, Jose Aldo hurt his rib, which forced him to pull out of yet another title fight.  Fortunately though, McGregor, who is really the one selling this card, is still on the card and now fighting Chad Mendes for the interim title.  Rory MacDonald and Robbie Lawler are also battling for the Welterweight Title in the co-main event on the card.

On top of these two main events the card is pretty stacked from top to bottom.  #8 and #11 featherweights Dennis Bermudez and Jeremy Stephens are on the card, as well as Brandon Thatch and Gunnar Nelson, two rising prospects in the Welterweight Division.  Thomas Almeida and Matt Brown are two other big name fighters who will be fighting at the MGM this weekend.

Let’s get right into it though with my pick for some of the main UFC 189 fights.

It’s hard not to believe in McGregor.  The man just exudes confidence and everything he’s said so far in his UFC career he has backed up in the octagon.  Chad Mendes may be a stylistic nightmare for the Irishman who hasn’t really faced a top level wrestler yet in his career, but Conor’s take down defense has shown to be extremely effective to this point in his career and training with a great submission wrestler such as Gunnar Nelson should have him prepared for Mendes.

I just think Conor will be superior on the feet and he will be able to land a lot of shots on Chad Mendes.  If he can keep from being put on his back he should be able to find a way to finish this fight at some point.

In their last fight, about a year and a half ago, Rory and Lawler had a 3-round battle that resulted in a split decision win for Robbie Lawler and set him up with a title shot.  Since then Rory has easily won 3 straight fights and he has taken his game to another level.  Lawler has also improved after losing his first shot at the UFC title before winning two quick fights to get his rematch.

I’m a big believer in what Rory MacDonald can do in the Octagon.  He’s so technically sound and his length is a huge asset in the Welterweight Division.  I think he will respect the striking of Lawler a bit more in this fight, but also respect that Robbie has great take down defense and is very good at doing damage to fighters while they are going for a takedown.  This could play into the fight and I expect Rory to use his more all-around skill set to pick Robbie apart and win this one inside distance.

Gunnar Nelson is coming off his first loss in his MMA career.  It was a split decision loss to Rick Story, but it really didn’t look like Gunnar had his best stuff.  I expect that loss to light a fire under Gunnar and for him to come out and show us what he can do against Brandon Thatch.  Gunnar has an unorthodox style that I think will be difficult for Thatch in this one.

If this fight gets past the first round I expect Gunnar to take the win.  He is a submission expert and Thatch just showed that he is susceptible to submissions with his rear-naked choke loss to Benson Henderson in his last fight.  Benson was a smaller Welterweight and Gunnar will be the same, but I expect the same result.  A loss for Thatch and for Gunnar to really jump up the rankings in the Welterweight division.

Those are the three fights I’m most looking forward to and how I see them playing out.