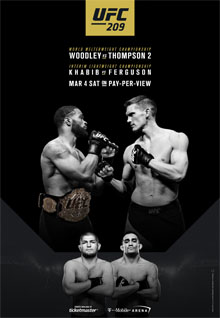 UFC 209 is the first flagpole card of 2017 for the UFC.  After capping 2016 with the massive UFC 207 that featured the return of Ronda Rousey, the UFC has had a fairly quiet two months with some average Fight Night cards and one of their worst PPV events in recent memory at UFC 208.  This card though should bring back all of the casual fans to the UFC.  The main event is a rematch of the UFC 205 fight of the night draw between Woodley and Wonderboy.  This time hopefully we get a winner and a true champion at welterweight.  Also on the card is the interim title at lightweight between Khabib Nurmagomedov and Tony Ferguson.  The other main fight on the card is a heavyweight tilt between Mark Hunt and Alistair Overeem.

In this article I’ll take a look at the odds for these three main fights on the card and give my picks.  At the end of the article I’ll do a quick run down of how you can get your bets in online for any of you who have yet to open a betting account online.

I’ve been looking forward to this fight since they called the initial fight between these two a draw.  I personally had it 48-47 for Wonderboy, but I can understand how round 4 would be scored a 10-8 so a draw was the right call.  Overall, Wonderboy is the better point fighter between these two and I also think he can have the more dangerous strikes if he lets his techniques flow.  In the last fight he controlled the pace, but didn’t throw enough once he had Woodley up against the fence.  If Woodley is flat up against the fence he isn’t able to do his running overhand right technique which is how he ends most of his fights.  If Wonderboy can take more advantage of the centre of the octagon and not be afraid to unleash some exciting striking once he’s in control I think he will get the better of Woodley in this rematch.

I think people are sleeping on Ferguson in this fight.  Yes, Khabib is undefeated and he looked very good in his fight against Michael Johnson, but Ferguson is another animal.  Tony will be the better striker on the feet in this fight and I think he will be able to keep this fight standing if he’s able to maintain distance against Khabib and keep the pressure on the Russian throughout the fight.  Ferguson throws an absolute ton of punches averaging 5.23 strikes landed per minute, which is ridiculous.

He showed he can go hard for 5 rounds in his last fight against Dos Anjos and I think he has the game to beat Khabib and shock the world.

Mark Hunt has a punchers chance in this fight.  That said, Overeem is the vastly superior technical fighter and if he can avoid the big punch from Hunt he should be able to win this fight.  I expect Overeem to be able to control distance well against the much shorter Mark Hunt and I think Overeem could do quite a bit of damage with his kicks in this fight.

Overeem has learned to fight more defensively of late and I expect him to be able to avoid the bomb from Mark Hunt and do enough damage to either get a TKO or a decision in this fight.

Now that you have my picks for the 3 main fights on the card here is a quick guide to placing these bets online.

I used the odds from BetOnline above for each of the fights.  I highly recommend BetOnline as a top end sportsbook for MMA betting for players from around the world.  They are offering a 50% up to $2500 sign up bonus.  Check out our full review here.

Before you bet you’ll have to fund your account.  BetOnline accepts Visa, MasterCard, bitcoin, litecoin, Skrill, Neteller and more.  You will have no trouble finding a great deposit and withdrawal method to get your money into and out of your BetOnline account.

Now you’re ready to place your bets.  Once at the BetOnline sportsbook click on ‘Martial Arts’ in the left sidebar and select ‘MMA’.  This will bring up all of the bets available for UFC 209.