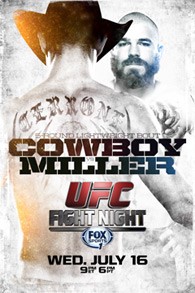 UFC Fight Night 45 is taking place this Wednesday night at Revel Casino in Atlantic City, New Jersey.  The headliner is Donald “Cowboy” Cerrone taking on Jim Miller in a lightweight battle with some significant implications on the division.  Cerrone and Miller are ranked #6 and #7 respectively and a decisive win by either of these fighters would do a lot to move them up the Lightweight leaderboard and give them a potential shot at the title in another fight or two.

Edson Barboza, who is ranked #13 in the same division is also in action against Evan Dunham who has a big opportunity to jump into the conversation.  Rick Story is another fighter in action and he is always a treat to watch.  John Lineker who is currently ranked #7 at flyweight is also fighting, but he is up against a relative unknown in Alptekin Özkiliç so he will have more to lose than gain in this fight.

Let’s look at the top fights and I will pick my winners:

Cerrone has beat both of the co-main event fighters within the past year and he will now look to add Jim Miller to the list.  He has been an absolute beast lately winning his last two fights in the first round.  He can finish by submission or knockout and will be a real threat for Miller.  Miller on the other hand has had some easier opponents, but his last two wins have also been finishes in the first round.  I don’t expect this fight to go the distance.  Miller did lose just over a year ago to Pat Healy, but since Healy tested positive for marijuana the decision was overturned.  I like Cerrone in this fight based on his bigger recent wins and the fact that he is just an absolute beast in the cage.

As mentioned earlier both of these guys have lost to Cerrone within the last year.  That was Barboza’s first loss after being on a three fight winning streak.  This is in contrast to Dunham who has now lost 3 of his last 4 fights.  This is a huge fight for Dunham because 3 losses in a row can often result in being cut from the UFC.  A win from Barboza would also keep him in the rankings in the division and give him the chance at another higher ranked opponent in his next fight.  I do like Barboza to win this one.  Cerrone is a beast so we can’t look to much into that loss.  He is still an up and coming fighter who should beat Dunham fairly easily.

In the heaviest fight on the card Rick Story takes on Mafra at Welterweight.  Rick Story is coming off a split decision loss to Kelvin Gastelum and he has struggled throughout his career against the top guys in his division.  He has other losses to Mike Pyle, Demian Maia and Martin Kampmann within the past few years, but each of these guys are fairly big names.  He has wins over Brock Jardine, Quinn Mulhern and Brian Ebersole.  It seems like he beats a less known fighter then gets a shot against a higher ranked guy and fails.  Leonardo Mafra will be the lesser known fighter in this situation.  This will be his first fight in the UFC since UFC 147 when he was knocked out.  He has since earned 5 straight wins in other promotions and earned his way back to the big show.  I actually like Mafra to win this fight though.  He has earned his way back and Story is just an average UFC fighter.  A win here for Mafra would really give him a chance to work his way up the ladder in the UFC.