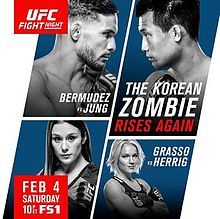 The UFC is headed to Houston this week to piggy back on the Super Bowl that is taking place the next day.  This Fight Night card is headlined by Dennis Bermudez vs Chan Sung Jung, but also has some other interesting fights such as Abel Trujillo vs James Vick, Alexa Grasso vs Felice Herrig and Jessica Andrade vs Angela Hill.

In this article I’ll take a look at the odds for each of the fights from the main card and give a quick prediction for how the fight will go down.  At the end of the article I’ll also provide a simple step by step guide to start betting online for those of you interested in betting on this card.

I will be using BetOnline.ag odds for each of the fights.

Bermudez was on the trajectory towards the featherweight title before a submission loss to Ricardo Lamas and a late fight flying knee TKO to Jeremy Stephens derailed his hopes.  He’s since won a couple fights and now jump up a bit in competition against Sung Jung.  I like Bermudez in this one because at his best he’s one of the best in the division and we can’t be sure how Sung Jung will look considering he has not fought since 2013 due to mandatory military service in Korea.

Grasso is the young undefeated prospect going up against the veteran in Felice Herrig.  Grasso has looked very good in her fights so far, but this is a step up in competition for the Mexican.  I’m going to lean Herrig in this one because it seems like she has rededicated herself to the sport and she’s a tough out for anyone.

This is probably my favorite fight on the card.  It’s a pick’em as it should be, but I’m leaning towards Trujillo.  He’s the more athletic of the two fighters and his only losses in the UFC have come to Nurmagomedov and Ferguson (although he did loss to Tibau, but that fight was changed to a win after PED testing).  Trujillo has more weapons and I think he will outclass Vick on the feet.

Saint Preux has had a rough run of late in the UFC going 1-3, but the only really bad loss was to Jimi Manuwa via KO in his last fight.  I still have to give the nod to Saint Preux here.  He should be on another level than Oezdemir who has not faced a fighter of this caliber and has even had trouble against regional guys.

Angela Hill went down to Invicta and did extremely well winning her four fights and going on to win the Invicta Strawweight Championship.  That said, this is a very rude welcome back to the UFC with her having to face Jessica Andrade.  Since dropping down to strawweight Andrade has gone 2-0 with finishes over solid fighters in Jessica Penne and Joanne Calderwood.

Andrade should be able to overpower and overwhelm Hill en route to another finish.  I think Andrade should get a title shot after this win.

How To Bet On UFC Houston Online

Now that you have my picks here’s a quick guide to get these bets placed online.

First you will need to open an online betting account.  I’ve used odds from BetOnline for each of the fights above and I highly recommend them to anyone looking to bet on UFC fights.  They accept players from around the world and offer a 50% up to $2500 new player bonus.  Check out our full BetOnline review here.

Next you’ll have to deposit in order to have funds online with which to place your bets.

BetOnline accepts a wide range of deposits including Visa, MasterCard, bitcoin, litecoin, Skrill, Neteller and more.  You will have no trouble making a deposit to BetOnline from anywhere in the world.

It’s time to place your bets.  Once in the BetOnline sportsbook click on ‘Martial Arts’ in the left sidebar and then select ‘MMA’.  This will bring up all of the UFC fights that BetOnline is currently accepting bets on, which will include the fights from Fight Night Houston.