Bet On Verrazano at The 2013 Kentucky Derby 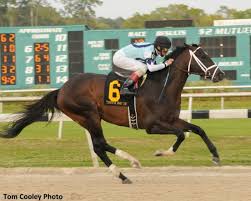 The Kentucky Derby is only a few short days away and the current favorite to take down the biggest horse race in the United States is Verrazano.  The 3 year old comes in at 4/1 at this time and is one of two main favorites for the race.  The other big favorite being Orb at 5/1.

Check out our Kentucky Derby page to learn more about how to bet on the race.

Verrazano has won each of the four races he has competed in this year, including a big win over another Kentucky Derby frontrunner, Normandy Invasion (10/1) in the Wood Memorial race earlier this month.  That race was only won by three-quarters of a length though, and there are questions surrounding Verrazano heading into Saturday’s race.

The good thing about Verrazano is that his final 3/8’s of a mile at Wood Memorial were one of the fastest among the Derby’s top horses, even though his overall race time is a bit slower than some of the other horses being dubbed as possible Derby winners.  This last push by Verrazano shows that he can catch other horses down the stretch and also that he will be able to run the slightly longer distance that the Kentucky Derby requires.

Orb is another horse that won his last four races.  He actually had a faster time than Verrazano in his last mile and an eighth race and that was over another horse with decent odds in Itsmyluckyday (12/1).  Orb is another horse though who has the ability to win races without amazing times as he has a tendency to pass horses and then feel it is enough to just stay ahead of them.  His trainer has been working on that with him this week though and the progress has been good with him leaving the horses he is training with behind him.

I really like Orb at 5/1 and it will be interesting to see who finishes ahead out of these two.

Of course we cannot forget about the field at the Kentucky Derby.  It is actually very rare for the Derby favorites to win the race because there really isn’t that much information to go on heading into the Derby.  Look at I’ll Have Another who was 15/1 heading into the Derby last year, before winning that and also the Preakness Stakes.

Some horses to watch out for include Goldencents, Revolutionary, Normandy Invasion and Overanalyze, all at 10/1 odds.  Itsmyluckyday, Vyjack, Java’s War and Lines of Battle would also not be huge surprises to win the race.

These odds are from Bet365.com.  To see odds from Bovada.lv click here and learn more about betting on the race if you are from the United States.

One Response to “Bet On Verrazano at The 2013 Kentucky Derby”