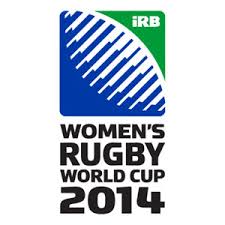 The 2014 Women’s World Cup will crown a champion this Sunday in Paris, France.  The nations that have earned the right to compete in the finals are England and Canada.  It’s a very interesting finals because these two teams battled to a 13-13 draw in their last round robin game, which was enough for both teams to earn 12 points and advance to the semi-finals.  I should note that there were three pools and only one pool had a second place team advance.  I should also note that only a draw in that final game would have put both teams through because New Zealand who dropped a game to Ireland in pool B would have had a better point differential than either finals team.

This 2 wins and 1 loss record slotted England and Canada into 3rd and 4th in the overall standings.

Canada was up against host nation France in the first semi-finals and they won an inspired game 18-16!  It was the biggest win in Canadian Women’s Rugby history and they will now try to top it in the finals.

England absolutely destroyed Ireland 40-7 in the other semi-finals.  You have to wonder what would have happened in this tournament had New Zealand not dropped their group game to Ireland by a score of 17-14.

So now it’s time for the finals.  Here are the odds from Bet365.com for the match:

I’m surprised to see that England is such a big favourite in this match.  Canada was probably the better team in their 13-13 group stage draw and they also beat the stronger semi-final opponent in France.  England did have a better point differential in the group stage, but being able to beat weak teams by a few extra tries doesn’t equate to being able to beat an actually competitive side.

Earlier in the year the annual Six Nations Championship took place with France, England and Ireland the top three teams to compete.  France beat England 18-6 in this tournament, which was enough for France to finish atop the table.  This shows that Canada has already beat a more difficult team than England.

Another good example is in 2013 at the Nations Cup in Colorado.  England and Canada actually played twice with Canada winning on both occasions.  I’m shocked that Canada is such a big underdog heading into this game so I think this is a great betting opportunity.

–> Check out our rugby page to learn more about betting on the game.