The top NBA matchup this week is between the Golden State Warriors and Oklahoma City Thunder, who will meet at the Chesapeake Energy Arena on Saturday night. The game will begin at 8:30 PM. ET.

The Warriors and Thunder are two of the three favorites to win the Western Conference title, which makes this a very big game for both teams. In their first meeting of the season, the Warriors were able to pull off a 116-108 victory over the Thunder, but they had trouble trying to slow Kevin Durant down.

Durant, who is rumored to join the Warriors as a free agent next season, had one of his best games of the season in that game. He made 12 of his 25 shots, scoring 40 points in the game, he also had 14 rebounds, five assists, and 2 blocks in the game. 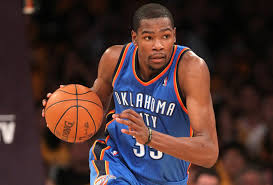 Durant will have to match Curry shot for shot for OKC to win this game.

If Golden State can’t figure out how to slow both players down, they will have a hard time defeating the Thunder, who will have their fans screaming at their loudest in this game.

The Warriors have been dominating opponents all season, especially in from of their home crowd at the Oracle Arena. On the road, the Warriors are almost as dominant with a 28-5 record.

Golden State will be going for their 14th win in their last 15 games.

At 52-5, the Warriors still have a very good chance of breaking the record for most wins in a regular season because they are currently ahead of the pace set by the 1995-1996 Chicago Bulls.

With the Chicago Bulls record in sight, the Warriors know what is at stake and a few players have said the team is going to try and break the record.

The Thunder have struggled a little in recent weeks, and are 1-3 in their last four games. The biggest reason for their struggles has been their lackluster defense that allowed their last four opponents to score an average of 110 points against them.

With Golden State averaging 115 points per game, this one could get ugly really fast if the Thunder don’t turn in a great defensive effort.

BetOnline.ag has the Warriors favored to win this game by 2.5 points. The over/under on total points scored is 234.  Check out our full BetOnline.ag review to learn more about our top rated sportsbook.

The Warriors look like the smart pick in this one because of how well they have played all season long. As I mentioned earlier, this game means a lot more to the Thunder than the Warriors so I’m picking the Thunder to win the game.