Week 7 of the NFL season begins on Thursday night with an NFC West rivalry game that has been one of the best rivalries in the NFL over the last three years.

The Seattle Seahawks travel to Levi’s Stadium in Santa Clara, to take on the San Francisco 49ers. The game will be televised on CBS and NFL Network, and is scheduled to begin at 8:25 PM. ET. 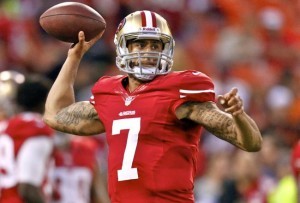 Kaepernick is going to need to find a way through this strong Seahawks defense to get this win.

The 49ers and Seahawks have won the NFC West for the past four seasons and have represented the NFC in the last three Super Bowls. Unfortunately, it looks like their days of dominance is over, with both teams currently 2-4.

The 49ers were expected to struggle this year because they fired Jim Harbaugh, who was responsible for turning the franchise around, during the offseason, and they also had a mass exodus of players who either retired or signed with another team.

The Seahawks were expected to be one of the top contenders in the league this season with the addition of Jimmy Graham on offense. Unfortunately, their offense hasn’t been as good as most people expected it to be, and their defense is also not dominating opponents the way it had in the past seasons.

Despite having losing records, both teams still have a chance to clinch a postseason berth, but they can’t afford to lose too many games. A win on Thursday will move one of the teams to 3-4, and move them a game closer to the final Wild Card spot.

The 49ers were embarrassed at home by the Seahawks last season and had to watch the Seahawks eating Thanksgiving turkey in the middle of their new stadium. The team would love nothing more than to make a statement with a big win against their bitter rivals.

Over the years, Kaepernick has struggled against the Seahawks, but he can’t afford to struggle against them this season if he wants to keep his team’s playoff hopes alive.

Other than Kaepernick’s struggles, the 49ers also have to find a way to get Carlos Hyde more involved in the offense. When Jim Tomsula was hired, he said the team would go back to its run-heavy offense, but other than the first game against the Vikings, Hyde hasn’t rushed for 100 yards in a game this season, which is part of the reason the team has struggled. If they can get Hyde more involved in the offense, Kaepernick won’t feel like he has to do everything by himself.

Seattle’s defense has been very suspect this year, at first, most people thought it was due to the absence of Kam Chancellor, who missed the first two games of the season. Since his return, the team is 2-2, so all their problems are obviously not just because he missed a couple of games.

The biggest issue the defense has had is closing out games, they have been outscored in the fourth quarter of all their games this year, and they need to figure out how to things back on track.

Offensively, their running game hasn’t been as dominant as it has been in the last few years, which has put a lot of pressure on Russell Wilson. They should be able to move the ball effectively against the 49ers, who have one of the worst defenses in the league, but they will need to score touchdowns instead of settling for field goals to win this game.

BetOnline.ag has the Seahawks favored to win this game by 6.5 points, while the over/under on total points scored is 42.  Check out our full BetOnline.ag review to learn more about our top rated sportsbook.

On paper, Seattle should dominate this game, but since it’s a rivalry game, I’m picking the 49ers to cover the spread.