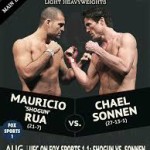 The UFC is back this Saturday with another intriguing Fight Night card that can be watched for free on Fox Sports 1 or Sportsnet 360.  The main event of the evening will be Chael Sonnen vs Shogun Rua.  This will be Sonnen’s first fight in the UFC after losing in both the Middleweight and Light Heavyweight Championship fights to Anderson Silva and Jon Jones.  Some other big names on the card include Alistair Overeem, who fights Travis Browne, Urijah Faber and Uriah Hall who became a big name following some of his devastating knockouts in The Ultimate Fighter.  Overall this is a great Fight Night card with a few top contender match ups.

Let’s look at the odds for a few of the fights.  These odds are taken from 5Dimes.eu, a great bookie that provides some of the most bettor friendly odds for every sport.

Sonnen comes into this fight as a small favourite, even after he did not perform particularly well in either of his last two title shots.  Sonnen has remained at light heavyweight and it will be interesting to see how he stacks up at this weight against another one of the top fighters in the UFC.

Rua who seems to win and then lose over the past 3 years, is due for a win.  He lost to Alexander Gustafsson last December, with Gustafsson now having the next crack at Jon Jones.  There is a lot of unknowns in this fight, so bet with care.  I personally like Rua as a slight underdog.

Overeem will be out for blood after his embarrassing loss at the hands of Bigfoot Silva.  He hasn’t fought since February so he will be fresh in this one.  Browne defeated Gabriel Gonzaga in his last fight, which was after he also lost to Bigfoot Silva in round 1 in October 2012.  I don’t see Overeem losing this fight and putting himself that much further from the title shot he felt he deserved, and would have had if not for the slip up against Big Foot.

Faber has won his two fights since losing the interim Bantamweight Championship to Renan Barao.  Faber still seems to be the 3rd best fighter in the Bantamweight division, but he will have to prove it once again tonight.  Alcantara does have some weapons, but Fabers experience against top fighters should show through in this one.

To see the odds for the other fights head over to 5Dimes.eu and click on ‘UFC’ under ‘Fighting’.

How To Bet on UFC Fight Night 26

To bet on any of these fights you will first need to sign up an account.  Click here to visit 5Dimes.eu and proceed to open an account.  You can then click on the ‘cashier’ button in the top navigation to fund your account.  5Dimes offers up to $520 in free plays for new depositors and the more you deposit the more of this free cash you receive.

Check out our UFC betting section for more information on betting on MMA and click here to see the official Shogun vs Sonnen event page at UFC.com.