The Minnesota Vikings will be taking on the Dallas Cowboys in week 3 of the NFL preseason. The game will take place at AT&T Stadium in Arlington, Texas, on Saturday, August 29, at 7 PM. ET.

BetOnline.ag has the Cowboys favored to win this game by -1 points, while the over/under is listed at 42 points.  BetOnline is one of our top rated NFL sportsbooks.  Check out a review here.

Click here to visit BetOnline.ag and place your bet.

So far this preseason, the Vikings have remained undefeated, and they are hoping the streak continues against the Cowboys. Teddy Bridgewater has played very well in limited action, going 22-28, for 219 yards, 1 touchdown, and 0 interceptions in the three games they have played. 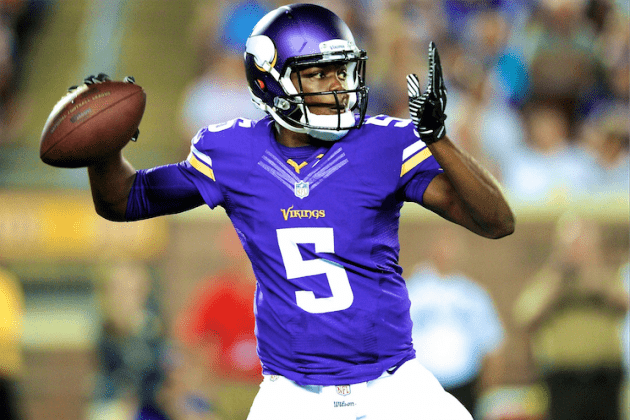 Teddy has played well this preseason and will look to continue to improve as we move closer to regular season play.

Even though it is just the preseason, the Vikings have to be pleased with what they have seen from their young quarterback so far. What makes his numbers even more impressive is the fact that he is playing well without a running game.

Through the first three games of the preseason, the Vikings have only rushed for over 100 yards once, which is mostly due to the fact that they have held star running back Adrian Peterson out of the preseason games. Peterson isn’t expected to play again this week, but the Vikings need their backup running backs to start playing better than they have, because they will need them to step up if Peterson gets injured during the regular season.

The Dallas Cowboys, on the other hand, are still looking for their first preseason win. The reason the Cowboys haven’t won a game yet is because they have been keeping their starters on the sidelines, to avoid them getting injured. None of their top offensive players played in their first preseason game, and last week, quarterback Tony Romo played only one series, while wide receiver Dez Bryant was held out of the game.

Despite their attempts to protect their stars from injuries, the Cowboys suffered a major injury this week when cornerback Orlando Scandrick suffered a season-ending injury in practice this week. This means that the Cowboys will have to rely on Morris Claiborne to be their top cornerback this season.

Claiborne has been a disappointment since he was drafted by the Cowboys, but this will be his opportunity to show that he can be a big-time player in the NFL.

With the Scandrick injury, the Cowboys are likely going to keep most of their starters on the bench again when they play Minnesota. If they allow their starters to play, they likely won’t play more than one series.

The Vikings are going into the game with a lot of confidence, and will give Teddy Bridgewater some significant playing time again, so the young quarterback can continue progressing, and become the player they think he can be.

The betting line in this game currently favors the Cowboys at -1. If this were a regular-season game, I would jump on the Cowboys because I believe they are a better team and because they are playing at home. Since it is a preseason game, and Jason Garrett is keeping his starters on the bench, I’m going to pick the Vikings not only to cover the spread but to win the game as well.