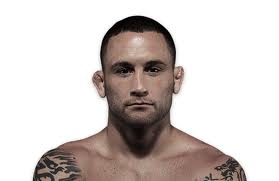 UFC 144 is set to take place in Japan this Saturday and the lightweight belt is one the line.  Frankie Edgar will have to defend his belt once again, this time against Ben Henderson who has won all three of his UFC fights and is 15-2 in his MMA career.  This fight is going to be a crazy one that is likely to go the distance.  Like in all title fights there are plenty of betting options to wager on in this Henderson vs Edgar fight.

Edgar is a slight favourite in this one, which he should be seeing as he has defended his belt three times and has only lost once in his MMA career.  Edgar is a smaller 155 pounder than most in the weight class, but his quick feet and hands, as well as his heart has made him the champ.

Henderson is bigger and likely a better wrestler, so it will be interesting to see how this fight progresses.  Henderson definitely has the skills to beat Edgar, which is why he is only a very small underdog in this title fight.

As you can see by these odds this fight is expected to go to decision.  Frankie Edgar has never been submitted or knocked out in his MMA career and for Henderson’s lone tap out you’d have to go back to his 3rd professional fight way back in 2007.  Henderson’s 3 UFC wins (last 3 fights) have been by decision and Edgar usually wins by decisions as well having 8 of his last 11 wins coming from decision and that doesn’t even include his draw with Gray Maynard two fights ago.  This fight has a good chance of going the distance, but both fights do have the power and technique to finish the fight if the opportunity presents itself.

5Dimes.com also offers a ton of prop bets such as which round the fight ends in, how the winner finishes the fight and much more.  Visit 5Dimes.com to check out all of the prop bets for the Ben Henderson vs Frankie Edgar fight.

The Ben Henderson vs Frankie Edgar fight is the headliner for UFC144, but there are also a ton of other big fights taking place including Rampage Jackson vs Ryan Bader, Mark Hunt vs Cheick Kongo, Yoshihiro Akiyama and Joe Lauzon vs Anthony Pettis.  You can bet on all of these fights at 5Dimes.com, our top betting site for mixed martial arts.

Learn more about betting on the UFC by clicking the link.