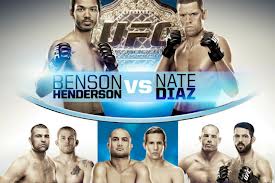 This Saturday is a huge card with UFC on Fox 5 surprisingly having one of the most stacked cards of the year for UFC even though the event will be viewed for free on the Fox station.  Benson Henderson and Nate Diaz are headlining the event with the UFC Lightweight Championship on the line.

Benson Henderson is the current holder of the lightweight title having won the championship in February of this year over Frankie Edgar and then defending the title against Edgar once again in April.  This will be Henderson’s first title fight in the UFC where he isn’t up against Frankie Edgar.

Nate Diaz, who is two years younger than Edgar at age 27, won the right to battle for the title after defeating Jim Miller via guillotine choke in May of this year in a title eliminator fight.  Diaz will have his hands full against Henderson, but he does have the submission skills to possibly pull out a win over Henderson who has won each of his UFC fights via decision.

Online sportsbook 5Dimes.eu has the following odds for the Henderson vs Diaz fight:

As you can see Henderson isn’t that big of a favorite in this fight and that may be because he hasn’t really been dominating his opponents in the UFC and has yet to stop a fight.  That being said Henderson is a beast who wears you down similar to GSP and that style has been proven to win fights in the UFC.

The oddsmakers have the over/under at 4.5 rounds with this fight likely going to a decision.

5Dimes also has some interesting prop bets on this fight.  Here are some odds, but visit 5Dimes.eu to see all of the available props on this fight:

As you can see the oddsmakers think it is more likely for Diaz to finish the fight than Henderson.  You can also bet on each fighters method of victory and which round they win in at 5Dimes.eu.

How To Bet On Henderson vs Diaz

Click here to visit 5Dimes.eu and open an account.  5Dimes is the best sportsbook for betting on this fight and they accept bettors from around the world, including the USA.

Then after you have funded your account click on either ‘UFC’ or ‘Props’ under the fighting heading to see all of the odds and place your bets.

Another big fight at UFC on Fox 5 is Rory MacDonald vs BJ Penn.  Click here to see our post on it.