The short track speed skating is one of my favourite events to watch at the Winter Olympics.  It’s fast paced and the races come down to tenths of seconds.  The skaters have to include tactics in their races, as well as flat out ridiculous speed.  In most of my other Winter Olympics posts I’ve focused on a particular event, but in this one I’m going to look at each of the Men’s short track speed skating events in this one article.

I’m getting the odds from Bet365, our top rated bookie for betting on the Winter Olympics.

***If you are from the United States then you will have to do your betting at Bovada.lv.  The odds should be very similar.

I’m only going to be including the favourites in these posts (10/1 or better).  Visit Bet365.com to see the full odds for each of these events.

There have been 4 World Cup events so far this season and these are what the oddsmakers are probably basing the odds on.

This will be the first short track speed skating event taking place for the Men.  It is scheduled to take place on February 10th.

Han-Bin Lee has 1 gold and 1 silver in this event out of the 4 races this season in the World Cup.

Charles Hamelin, the other favourite also has a gold and a silver in this event.  The 1500 metres is really up for grabs with a different winner in each of the 4 World Cup events.

The Men’s 1000 metre short track speed skating will take place on the 15th of February.

Charles Hamelin has been dominant in the 1000 metres at the World Cup this year winning 3 golds out of the 4 events.

Victor An actually has not won this event at the World Cup races this year, but instead has 2 silvers in the 4 races.

Victor An has 2 golds and a silver in the 500 metres at the 4 World Cup events this season.

Charles Hamelin won the other 2 golds that An was unable to achieve, but he did not medal in the other two World Cups.

Vladimir Grigorev is right there with these two having won 2 silvers in these four events.  Could this be the time Grigorev moves up the podium?

The finals for this event take place on the same day as the Men’s 500 metres, February 21st.  That said the semifinals are schedule for the 13th. 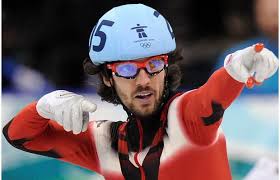 Charles Hamelin is a name that you see repeatedly on this page.  He is tied for the best odds in the 1500m at 11/4, sits at 2/1 in the 1000 metres, is the second favourite in the 500 metres and of course is the top athlete on the Canadian team picked to win the 5000 metre relay.  Hamelin has had a great year and has really worked to put himself in this position.  After a gold medal in the 500 metres at the 2010 Olympics in Vancouver (as well as a gold in the 5000 metre relay) Hamelin saw some poor results the following year.  That may sound bad, but in fact Hamelin decided to use the events more as a practice and try to put himself in different situations in order to gain experience and try new tactics.  This strategy has played dividends in 2013 with Hamelin being nearly unstoppable.  One main thing Hamelin wanted to change was to become better at the 1000 metre and 1500 metre distances, which were normally dominated by the South Koreans.  As you can see by his odds he has done this with him actually being a bigger favourite in those events than the 500 metres.  Now Hamelin just has to show up on competition day and do what he can.

Team Canada has won the 5000 metre relay at the last 3 World Championships, as well as at the 2010 Olympics.  In the 4 World Cup events leading up to the Olympics the Canadians have won twice, with the USA finishing first twice as well. Anything can happen in short track speed skating.