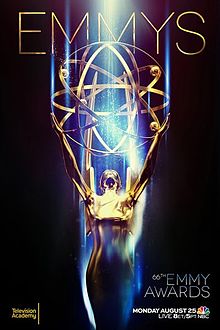 The 2014 Emmy Awards are set to take place on Monday, August 25th.  They will be broadcast live in prime time on NBC.  The 2014 Emmy’s are set to honour the best in United States prime time television from June 1st, 2013 until May 31st 2014.  There are some great shows that will be very deserving to win an Emmy this year, but like usual some very deserving shows will also go home empty handed.

I’m writing this post on July 29th, but many online sportsbooks already have odds available for the different Emmy categories.

For the purposes of this post I will be looking at the odds from Bovada sportsbook (Bodog for the Canadians out there).

I suggest you check out Bovada.lv for yourself though because the odds could change as the Emmys draw nearer.  You will find the odds for the Emmys by visit the Bovada.lv sportsbook and clicking on ‘Entertainment’ at the bottom of the sportsbooks left sidebar menu, followed by ‘Film/Television Props’.

Below I’m going to look at some of the high profile categories, give a run down of the odds and make my pick.

Breaking Bad completed it’s series and that will likely be enough to win the Emmy in this category.  Everyone seemed very happy with how they finished the series and I have found it very difficult to find a poor review.  I think it’s unfortunate that True Detective was put in this category instead of Outstanding Miniseries, which I think is much more fitting.  Game of Thrones also has an outside shot at winning this category, but the safe bet is Breaking Bad.  I should note that Breaking Bad won the award last year and this included beating out Game of Thrones.

Modern Family is defending it’s crown in this category, but they are only the third favourite according to the oddsmakers.  Orange Is The New Black is new to the category and I think it would be great for a Netflix Original series to win a major category.  I think Orange is the New Black or Modern Family will be taking down the comedy series this year.

This category is basically already wrapped up.  Fargo is 1/10 to win the category and at those odds you have to think it’s almost in the bag.  The only competition is really American Horror Story, but I think Fargo will take it down.  It’s unfortunate that we don’t get to see Fargo up against True Detective in this category because that would have really been interesting.

I personally like The Tonight Show with Jimmy Fallon the most out of these variety shows.  I think it is a lot different than the others and this could play a factor in Jimmy winning the award at the end of August.

I think it would be very cool if Matthew McConaughey won an Emmy the same year that he won an Oscar.  For this reason I’m rooting for the favourite in this category.  I think Bryan Cranston is the only actor with a chance at taking it down if McConaughey does not.

Aaron Paul probably has this, but my money is on Peter Dinklage.  His portrayal of Tyrion in Game of Thrones is most viewers favourite of all the unique characters in the show.

Outstanding Actor in a Comedy Series

Jim Parsons is the favourite to defend his 2013 Emmy in the same category, but I’m not so sure they will go back to Sheldon from the Big Bang Theory this year.  Ricky Gervais plays a very unique and likely difficult to play character in Derek and I also really like William H. Macy in Shameless.  I think either of these two actors who play more difficult characters than Parsons could be rewarded this year.

There are several other categories that I didn’t address in this article.  Visit Bovada.lv to see all of the up to date odds for each category.  Once agian, click ‘Entertainment’, followed by ‘Television/Films’ from the menu at the Sportsbook to find these odds.