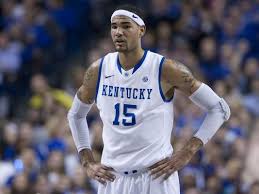 The 2015 NCAA Tournament is entering the sweet sixteen tonight, with each team having two games under their belt to this point in the tourney.  From those two games we can start to speculate which player will win the Most Outstanding Player of the tournament award after the champion has been crowned.

The winner of the MOP award will almost always be a member of the National Championship team.  In fact, the last player to lose the Championship game and win the Most Outstanding Player award was Hakeem Olajuwon, way back in 1983.

These are the odds from Bovada.lv, one of our top ranked sportsbooks for betting on college basketball.  As you can see, the first three players are Kentucky Wildcats, because they currently have 2/1 odds of winning the tournament.  That said, they don’t really have one star player, which makes selecting the MOP from that team just as much fun as for the tournament as a whole.

There are all of the players with odds of 20/1 or better.  To see the full list of players head over to Bovada.lv and click on ‘Basketball’, followed by ‘College Player Props’.

I’m going to break this down by team now to make it easier to understand.  This is because the MOP will almost 100% be from the winning team.

The Wildcats have Cauley-Stein, Towns, and Lyles as the three favourites of anyone to win the MOP.  Then they also have Aaron and Andrew Harrison at 12/1.  This team is so complete that no single player really outshines the others.  They take what the opponent gives them, so it’s anyones guess, which of these players gets the most opportunity to shine down the stretch.  That said I think the best bang for your buck out of those 5 is Towns at 7/1.  He’s a freshman that is just crushing it and only getting better.

Frank Kaminsky is the obvious choice if the Badgers win the title.  He’s the biggest star in college basketball this season and his teams success will have to be largely due to him if they are going to beat Arizona, Kentucky and ultimately win the tournament.  Sam Dekker is also a choice at 20/1, but Kaminsky is your man if Wisconsin pulls it off.

Jahlil Okafor comes in at 10/1.  He’s likely to go first in the draft this year and I think it’s possible he has a few big games down the stretch.  Justise Winslow is another option for the Blue Devils, but I think if Duke is to get this far they’ll need their big man playing extremely well.

Arizona has Brandon Ashley, Stanley Johnson and TJ McConnell each at 16/1.  This is another team, similar to Kentucky, where any player could step up and have a big game or games down the stretch.  I personally think TJ McConnell is their best player so I’d lean towards him to win the MOP if Arizona takes down the title.

We’re finally at Gonzaga.  I actually think this team has a very good chance of making the finals and then at that point anything can happen.  Kyle Wiltjer is 16/1 to win the award and Kevin Pangos is 25/1.  These two Canadians run this Gonzaga offense, but I think Wiltjer would have to dominate a couple games for this team to find themselves as National Champs.

So there are all of the favoured teams and their top choices to win the MOP.  If you think a different team has a shot then go ahead and visit Bovada.lv and see their odds for yourself.  Then you can weigh their chances and place your bets.