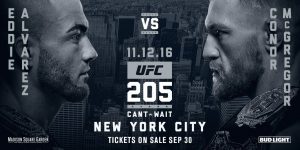 The UFC 205 press conference yesterday live from Madison Square Garden in New York City last night has me super excited for UFC 205 in November.  The card is the best that the UFC has ever put on and that includes UFC 100.  UFC 205 will have the depth that made UFC 200 so great, but it will also have the UFC’s biggest star as the feature fight with Conor McGregor going for belts in two divisions when he takes on Eddie Alvarez.  The UFC really outdid themselves with this one.  I had high expectations for this card and they have surpassed it.

Here’s the full card for those of you who live under a rock:

It’s the card that just keeps on giving!

Of course the majority of people will be tuning into the pay-per-view to see Conor McGregor take on Eddie Alvarez in the main event.  Conor is without a doubt the biggest star in the world and he has a chance to make history in this fight.

Bet On McGregor vs Alvarez

Here are the odds from BetOnline.ag for the Conor fight:

Conor is the favourite in this fight, and I think it’s deserved.  Alvarez is very lucky to be where he is after losing his initial fight in the UFC to Donald Cerrone and then winning two tight split decisions before being gifted his title shot.  Yes, he made the most of it with a KO of Dos Anjos, but most would agree he shouldn’t have been in that fight to begin with.

These odds could change, so if you like them I’d get your bets in right now.  Click here to visit BetOnline.ag and place your wagers.

Here are some other early odds for UFC 205 from BetOnline.ag:

This is another fight where the title holder was gifted his title shot, so I’m not surprised that Wonderboy, the contender is the favourite in the eyes of the bookies.  This is one fight I’m really looking forward to and I think Wonderboy will get the job done and become a much loved champ in the sport.

I was glad to see they had worked things out with Weidman and are including him on this card.  If he truly is fully healthy then I think the odds are very fair here.  Weidman is the better fighter, but Romero has that KO power and the ability to come back from the dead.

I’m done with betting against Cerrone, but I think this is a very difficult fight for him.  If Gastelum has a good weight cut he’s a very dangerous fighter.

Kennedy hasn’t fought in two years, but the oddsmakers obviously still think he’s got what it takes according to these odds.  Or possibly more accurately the bookies are counting Evans out.  I agree that Evans best days are behind him and this could be the last fight of his career if Kennedy wins this decisively.

All of the odds will continue to be available at BetOnline.ag until the UFC 205 fights take place in November.  The odds will change, so make sure you get your bets in right away if you see a line you like.